The SS Daisy Legal History Committee is proud to present their latest publication:

Edward M. Archibald’s Digest of the Laws of Newfoundland (1847)

Edited with Introduction and Notes by Christopher Curran 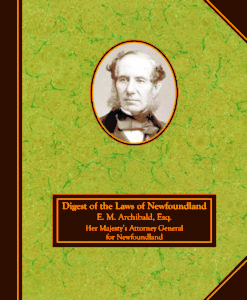 Published by newspaperman Henry Winton in 1847, Archibald’s Digest of the Laws of Newfoundland was a staple on Newfoundland judges and lawyers’ bookshelves for more than 100 years.

This is the second in the SS Daisy Legal History Committee’s reprint series, “Classics in Newfoundland Law.”  The series is intended to make rare book resources readily available to the Bar and public at a reasonable price.  This reprint is a copy of an 1847 original bearing the signature of F.B.T. Carter, who served as Chief Justice of Newfoundland from 1880-1898.  In addition to Archibald’s Notes and Comments on the 1824 Act and Royal Charter, Appendices 1 & 2 reproduce the August 1831 Report of the Judges of the Supreme Court of Newfoundland to His Majesty’s Government upon the Judicature Bill and the February 1832 Report of His Majesty’s Attorney General of Newfoundland on the Judicature Laws of that Colony, published here together for the first time.

Taken as a whole, the Reports and the Digest provide an insightful account of the development of the law in Newfoundland and Labrador during the early 19th century, the issues arising in respect thereof as identified by Judges and practitioners and proposed fixes. They enhance our understanding, not only of the legal but also of the social, political and economic context of the watershed judicature reforms of the period.

Available for purchase from the Law Society for $26.40 (HST included)